At the beginning of March, our Italian Distributor, 3M, took Big Wipes to Motodays 2015, the annual Motorbike Show in Fiera, Rome.  In the four days, the show attracted 145 100 visitors, who flocked in from the early hours of the morning, to the point that the exhibition was forced to open the show early on Sunday morning!

Motodays 2015 was an opportunity for those who live in the Center-South to see and experience new products and developments is respect of the motorcycle and two-wheeler market. 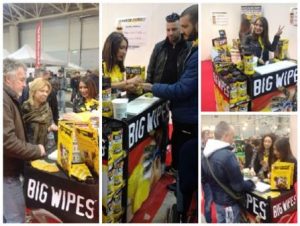 Thousands of enthusiasts filled every free corridor between the stands, climbing on all the bikes and scooters on exhibition, crowding outdoor areas for shows and special events.  Some exhibitors also allow visitors to test new motorcycle models and scooters on a 30, 000 square meter track dedicated to this purpose. As well as the actual bikes themselves, there were also many brands of clothing, accessories and extra and special parts on display.

The Big Wipes stand attracted the usual attention – a combination of the beautiful Big Wipes babes and the disbelief of punters when they saw how quickly and effectively Big Wipes removed engine oil, grease, silicone and other grime.

The importance of Motodays was underlined by the choice of Honda to debut their brand-new SH 300, the top model of the scooter range, thus celebrating in the best way the thirtieth birthday of the initials SH, which has contributed so much success of high wheel vehicles in Italy.

“We are pleased with the seventh edition of Motodays”, stated director of Fiera Roma, Mauro Mannocchi.  “An event that now characterises not only the Fiera di Roma but the entire city. Also this year we had an important feedback from visitors from all over Italy and, above all, a first positive feedback from the companies on the activities carried out in these 4 days. All the main market leaders have been present, strong of an industry situation that today seems to be less afraid of some time ago. In short, our Motodays are increasingly becoming an event that lights up the new economic season of the two-wheeled motor sector in early March, and with the opportunity to try the means fully satisfactorily. We therefore certify the claim and the challenge with which we launched the Motodays project, a project that … starts the market!”

There was also a strong emphasis on safety, a theme that has been constantly at the centre of Motodays’ focus.  To this end, the Traffic Police held education safety sessions, conferences were held where “Motorcycle riders talk about motorcycles”, and airbag demonstrations were organised daily by Dainese.