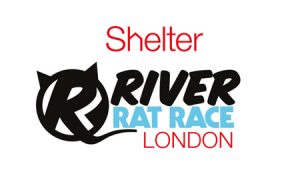 After an enthusiastic warm-up, runners emerged from the indoor obstacles onto the dock-side, welcomed by balmy sunshine, which had been absent during the previous few days.  From there the action was ‘set to soggy’ with a series of decidedly aquatic episodes looping around Docklands.

Things got rapidly wetter as we went head-long over (or under) giant sausages but the wettest was yet to come as we hurtled down a massive slide, kayaked over by City Airport and then threw ourselves from the top of the massive Truck Jump. There were inflatables which we went under, over and through; walls which we vaulted; mazes which we stumbled through; 10km of pathways from which we enjoyed spectacular views of London’s architecture; a stretch of kayaking;  a steep water slide and the unrelenting flights of stairs that led to the one of the many bridges that span the river. 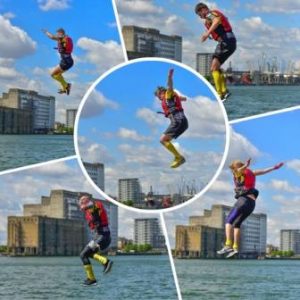 For the Big Wipes team and probably for most others, the highlight of the Rat Race assault course was a 20ft gangplank jump – see above  photos!

After the event, the Big Wipes team didn’t look as clean as when we started, but at least we knew what we could use to wipe all the dirt off.  Our smiles, however, could not be wiped off our faces for the rest of the day! 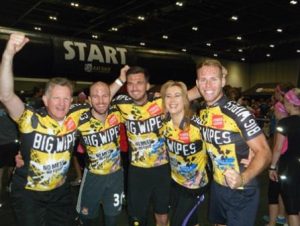 London River Rat Race is the Capital’s only aquatic obstacle race and it certainly made a splash!  Entry fees, combined with sponsorship and donations on the day, helped Shelter raise nearly 40 000 GBP! This incredible amount will help to provide a lifeline to thousands of families up and down the country facing homelessness.

Andy Fisher from Mudstacle summed the event organisation up as follows: “The warm reception I received there set the tone for the rest of the day; the race organisers were efficient, well informed and seemed to have been recruited from among the nicest people on the planet. While I will go on to speak in glowing terms about the race itself, I really want to emphasise that it was the encouragement, smiles and banter offered by the plethora of volunteers that I found most impressive about the event. If you were one of those beaming faces or know someone who was, I cannot say enough good things about the quality of the stewardship provided”.